Where I Was All Wrong About “Abundance” 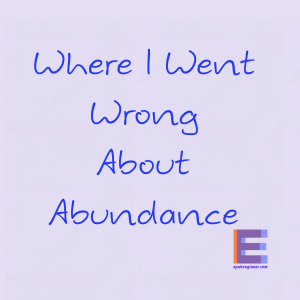 On a spiritual level, I’ve known for some years that generosity and gratitude are the keys that unlock “abundance.” The only “lack” that exists is in our minds. Excuse me.  I’ll speak for myself.  Lack lives in my mind, when I allow it.

On a practical level, it’s been another story.

I’ve been preoccupied with financial obligations, expectations, and “what should be done.”

Let me tell you about the shift that happened recently and what resulted for me.

About 6 weeks ago, I began participating in a challenge to start a blog. I put myself in a situation where I could follow along with a series of weekly tasks.

Oh, yes, there were a few decisions to make, but primarily the weekly tasks were about “doing something.”

In the process of doing, I met other people. I began to notice how I could help them. I began to hear feedback on how I had important things to share.

In simple terms, what I was writing to people daily became MORE important than any other focus I’d had before.

Suddenly, I was passionate about writing, and about sharing.

I felt the potential, the power of my own potential, not just a way to make money.

So when one of my website customers said, “We’d like to you to build another site for us,” two weeks ago, something remarkable happened.

Instead of having the first thought, “Cool. How much can I make form this job,” my first thought was, “Ok. Who can I hire to build my customer’s website so I can keep fueling this great blog business I’ve started over here?”

That has never happened before.

I’ve thought of outsourcing before, but it’s never been my FIRST thought.

Then I went for the real test. I went to my husband and explained my choices. Either I could take the entire website fee for us and do the work myself, or I could pay roughly 35% and sub out a designer.

At first he frowned and said we needed the dollars. Then he looked at me and said it was my decision.

Do you know what happened immediately after I made the decision to bless the sub-contracted web designer?

$197 came sailing into my Paypal account! It was a payment from someone who’d seen a buy button I’d posted for a workshop in October of last year! The woman wants to take the workshop this October. She’s so excited to come and learn how to publish her portfolio in a Kindle book, she’s willing to come sooner if I have an opening.

An abundant life is all around me. It isn’t in my bank account. It’s in my ability to reach and to help many people.

There’s an abundance in MY POTENTIAL.

You have it too. Chances are great that someone is hoping and praying that you’ll start your blog, and start sharing with them.

Don’t preoccupy yourself with what to write about. Look around for someone who needs help.

I’ll be sharing the direct mail I got from Google last Friday. It’s gonna be good!!

6 thoughts on “Where I Was All Wrong About “Abundance””